Fun for the WHOLE family & best for ages 1-10! We’ll keep it “not-so-spooky” for the little ones and make sure EVERYONE gets into the Halloween spirit while helping raise money for the library! All ages are encouraged to come in full costume!

Trick-or-Treating: Stop at each location, take a cute picture, and receive a not-sweet-treat.

Temporary Halloween Tattoos: For all ages!

Halloween Photo Station: We’ll have a dedicated station where you can get a cute fall-themed family photo. Hand a staff member your phone, we’ll snap a free pic, and it’s yours to print and frame!

Haunted Snack Shack: We’ll have snacks to purchase throughout the evening, such as chips, sweet treats, juice,     water, apple cider, and coffee. All snacks/drinks are $1.00 each and are pre-packaged.

A Haunted Carnival: Featuring a variety of spooky games to play!

Haunted Mini Golf in the Stacks: Golf through the stacks and get into the Halloween spirit!

Tickets on sale online or in person at the library. Entry is timed to avoid congestion. Please purchase tickets in advance. Tickets at the door may not be available.​

Drive Thru Trunk of Treat 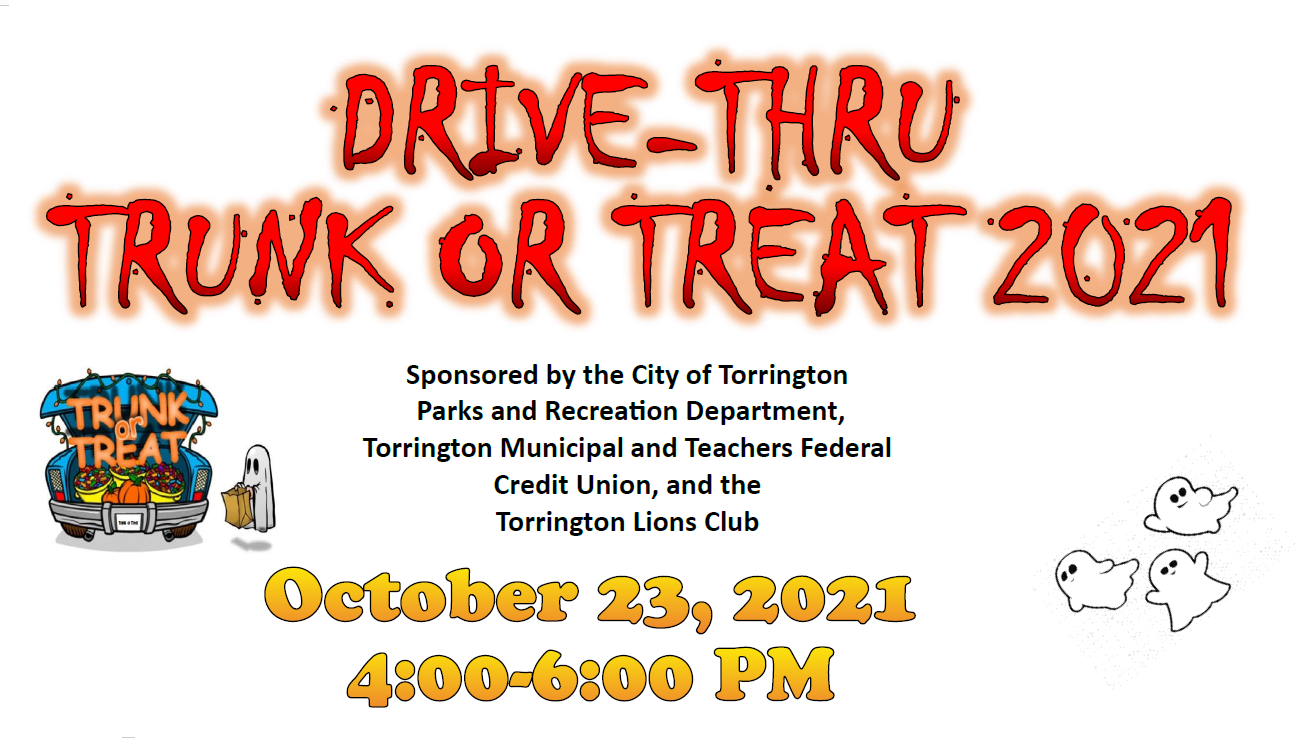 Torrington Parks and Recreation is looking for organizations or individuals that are interested in registering (and decorating) their vehicle for this event to hand out candy to the Trunk or Treaters, must pre-register at the Parks and Recreation Dept. by filling out a registration form.  Space is limited and will fill up fast, so register early.  Applications must be received by Oct. 8, 2021

Sponsored by the City of Torrington Parks and Recreation Department, Torrington Municipal and Teachers Federal Credit Union, and the Torrington Lions Club.

A one hour program with dramatic performances of The Tell-Tale Heart and The Raven. Campbell Harmon speaks in-character as Poe with the audience about the author’s life, his death, and his profound influence on American literature; dispelling the myths that have surrounded his legacy to show how his works continue to affect us today.

This great writer is brought to life by actor Campbell Harmon in dramatic readings, historical biography, and direct audience interaction.

Edgar Allan Poe was the first American writer to attempt to support himself solely on writing alone. He wrote the first modern detective story, the first modern science fiction story, and founded the modern horror genre. His famous, tragic love for his wife, Virginia, helped to inspire his landmark poem, The Raven. Speculation over the cause of his mysterious death in 1849 continues to this day. His writings still speak to us more than 160 years later and have inspired countless stage and film adaptations.

Campbell Harmon has performed as Edgar Allan Poe since 2009. He has brought the Master of the Macabre to life for audiences across America. Harmon has worked with libraries, schools, and the National Endowment for the Arts to further historical education and spark a love of reading in young and old alike. Harmon is a displaced Kentuckian and graduate of Yale Divinity School. He lives in Wallingford, Connecticut in a 120 year-old house with a 102lb dog. Find out more about Campbell Harmon at: https://thepoeactor.com/.

Halloween Manhunt throughout the Library!

Halloween Manhunt throughout the Library!

Teens ages 11-17 are able to come dressed in a Halloween Costume and play Manhunt (hide and seek) throughout the dark and creepy Library!

Torringon Jack-o-Latern Jubilee
THE HONEY LOCUST BOUTIQUE IS EXCITED TO BE A PART OF THIS EVENT IN TORRINGTON!  DOWNTOWN WILL BE A-GLOW WITH PUMPKINS! VISIT YOUR FAVORITE SHOPS AND RESTAURANTS. STOP BY FRANKIN PLAZA FOR PUMPKIN FUN, PET PARADE, VENDOR MARKET AND MORE!

This Sunday, we will be having our first annual Howl-O-Ween party at the brewery. Our friends at BAAC (BIkers Against Animal Cruelty) will be joing in the festivities. Come out and support this great organization and the pups who are in costume. Prizes will be awarded for the Most Creative, Cutest, Scariest, and Funniest!

Halloween Costume Bash! Friday November 5th. Drink specials, prize for best costumes and one hellava good time! 👻😈🥃🍻🍺🧉 Smoke-N’-Whiskey will be Jammin out!! Come one come all!!

Click here for some frighteningly fun Halloween ideas!
Powered by