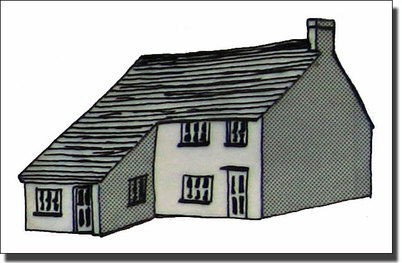 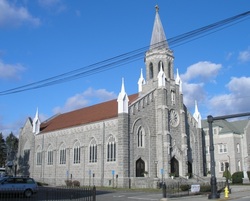 St. Peter parish in Torrington was formed in 1907, when Bishop Michael A. Tierney named Father Joachim C. Martinez as pastor to the city’s Italian immigrants. Beginning in a basement chapel on Center Street, the parish later faced closure, but a parish committee successfully appealed for the restoration of a permanent pastor in 1914. The parish then expanded, building a new church at 107 East Main Street in 1927-1928 and opening a parish school in 1956, which combined with St. Francis School in 2005. 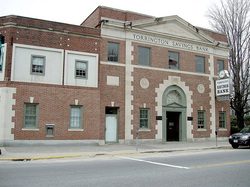 Torrington Savings Bank was established in 1868 and for many years was located in the Granite Block, which once stood on Main Street. Their current building, at 129 Main Street, was built in 1938. It was designed by Torrington architect Carl Victor Johnson, who also designed the Torrington City Hall (1936) across the street. 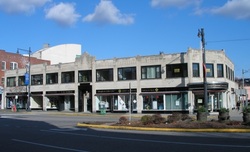 The Allen Building in Torrington (23 E Main Street) is an Art Deco commercial structure, occupying a prominent location, at the corner of Main and East Main Streets in the city’s downtown. The building, designed by Torrington architect William E. Hunt (who designed other art deco buildings in Torrington), was constructed in two sections. First came the north part, on Main Street, in 1930. It was built next door to the Allen House, a wood-frame hotel erected in the nineteenth century. After the hotel was damaged in a 1934 fire, it was demolished and replaced, in 1935, by an extension of the Allen Building that wraps around the corner of East Main Street. 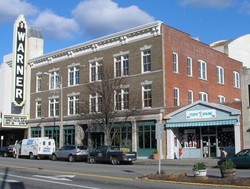 James E. Mallette came to Torrington as a stable boy and ended up becoming a leading real estate developer and financier. In 1916, he built the structure at 56-66 Main Street (next to the Warner Theatre) for the Chamber of Commerce, of which he was president. Today, the building is home to the Nutmeg Conservatory for the Arts, which has restored and expanded the building, adding a new facade on the first floor. 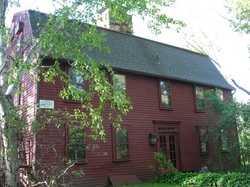 The Tollgate Hill Inn & Restaurant is listed in the National Register of Historic Places as the Captain William Bull Tavern. The Captain William Bull Tavern in Litchfield was built around 1745 on a farm on the East Litchfield Road, part of the Hartford to Albany highway. It is not known who built the house, but Capt. Bull was the owner of the farm by the 1790s. He had served at the capture of Fort Ticonderoga in 1775. The house passed through various owners until Frederick Fuessenich of Torrington purchased it in 1923. By that time it had fallen into disrepair and was in danger of being dismantled. Fuessenich saved it and moved the building to a new site about two miles away, placing it across from where the old tollhouse on the Torrington Turnpike had once stood. Fuessenich, an avid collector of antiques, restored and furnished the house, which he renamed the Tollgate Hill Tavern. (The house was featured in an article in the September 1925 issue of Country Life magazine). He also brought other colonial buildings to his property to create a period ambiance, including a house believed to have been the first school house used in the town of Berlin. The antiques collection was dispersed during the Depression. In the 1930s, Fuessenich and his wife established an inn at the Tavern. The Inn has since continued under various owners and the kitchen was completely renovated in 2003. 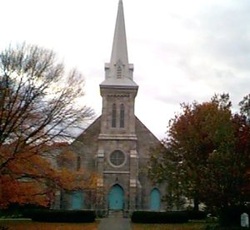 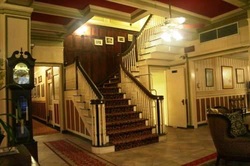 The Yankee Pedlar Inn opened in 1891 on the corner Main Street and Maiden Lane in Torrington. Originally known as the Conley Inn, it was built by an Irish immigrant named Frank Conley and his wife Alice. Designed by architect Robert Wakeman Hill, the four-story building was constructed of pallet brick, trimmed with Vermont Marble. Known for its comfort and elegance, the hotel became a popular and successful establishment. The Conleys managed the hotel until they died in 1910 and their niece, Mary Tryon, sold it two years later. It then passed through various owners and was expanded in 1918-1920. In 1940, the Yankee Pedlar restaurant and bar was added and entire hotel became known as the Yankee Pedlar Inn in 1956.

Skee’s Diner, owned and operated in Torrington by the Cisowski brothers, opened for business at the beginning of 1946. In an era void of fast-food restaurants, business for the Cisowski's business flourished offering quality meals -- served quickly and at an affordable price.

The historic maker, Jerry O'Mahony, manufactured the dinner sometime in the late 1920's.  Skee's Diner was #562 off the O'Mahony assembly line and built in the classic style of the era with steel construction, a distinctive barrel roof, marble counter top, metal stools, and sliding entry doors. But, what really stands out is the diner's interior. The windows, doors and even the ice-box are all manufactured using mahogany wood. Coated with a high gloss varnish, this magnificent interior exhibits a warm and inviting charm lacking in today's modern structures.

Although Skee's Diner served its last customer in 2001, that wasn't the end for the diner. In the fall of 2002, Skee's Diner was accepted into the National Register of Historic Places. It was slated to become a Welcome and Information Center for the Northwest Connecticut Chamber of Commerce back on January 21st of 2008 but the project fell flat. Since then the dinner has been moved to an undisclosed location and is process of being restored under the oversite of The Torrington Historic Preservation Trust which acquired the historic building last year. Information: {blog}{Project Website}

The Torrington Historic Preservation Trust is a Not-For-Profit organized in 1982 for the purpose of promoting, assisting and carrying out the preservation of historically significant structures in the city of Torrington. In addition to completing historic surveys on hundreds of buildings, the trust has sponsored applications to create four National Register Historic Districts in Torrington: Water Street, Downtown Torrington, Torringford Street, and Migeon Avenue.  {website}
Powered by