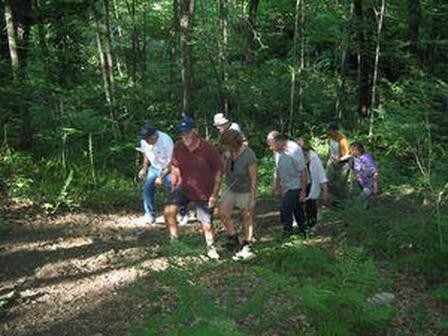 The Torrington Trails Network is comprised of a group of citizens who work to improve existing trails and create new outdoor trails, biking paths, and walkways in the City of Torrington, Connecticut. New volunteers are always welcome.

ABOUT US: The Torrington Trails Network (TTN) is a group of local volunteers interested in developing an interconnected, accessible trail system throughout the City of Torrington for various recreational purposes.
This trail system is being developed in accordance with the Open Space and Greenways chapter of the Torrington Plan of Conservation and Development. This plan will serve to guide the TTN along with the City's representative who will serve as liaison to City departments and commissions

MEETINGS: Meetings are generally scheduled the second Tuesday of each month at 6 pm, and are held at Maria-Seymour Brooker Memorial in Torrington. Occasionally, additional meetings are scheduled and are held at the same location or on-site at proposed trails and pathways.
CONTACT: {Email}{Info}{Website}{Facebook}

Red Mountain Trail
The Red Mountain Trail, a former railroad, sits right in the middle of downtown. The tracks and ties have since been removed and all that is left now is the path and great scenic views - in the middle of downtown! It is currently privately owned, and travels from North Elm Street in Torrington to Winsted Road. The end of the trail is just before the Squire Hill housing complex.

Trolley Line Loop
The Trolley Line Loop is a section of trail from Greenwoods Road south and travels behind the businesses to Harris Drive. It could create a loop to the current Sue Grossman Still River Greenway and give purpose to the undeveloped Machuga Park.

The Heritage Trail
The Heritage Trail is currently a trail in the planning that would connect towns along the Naugutuck River from Norfolk south to Beacon Falls, highlighting the heritage of the communities is passes through. The actual layout of the trail has yet to be determined. The Torrington Historical Society will play an active role in determining the sites that the trail passes alongside.